Click here to read the Special Report from William Critchley.

This report introduces the course and describes some of its history, as well as giving some insight into the proofreading profession.

Many years ago I met a young Greek man on a beach at Perissa, on the south of the island of Santorini. We got talking. I saw he was holding a folder in the crook of one arm - so I asked him what was it.

He opened the folder to show me some posters he had made of his poems. So that's what he was doing. Walking around quietly trying to sell his poems, for a few drachmas - before they were replaced by the euro.

I bought two of them - one was about the lions on Delos. I forget where that is now. The other had the simple title, Santorin - the old name for Santorini. He had signed the small poster with his name - Yiannis. I have always loved it.

Nothing is altogether lost,

Neither the silent pain of stars

Nor the ancient world of wisdom.

Under the rippling and deceiving surface

Naked and pure, the human spirit

That beckons our shadows

Into the first fresh gladness of awakening.

The island of Santorini, originally Santorin, is an island (area 28 sq. miles) in the Cyclades that was ravaged by a volcanic eruption around 1600 bc. Conveniently, the story about Santorini in the main Learn Freelancing exercise makes an excellent exercise to test your proofreading skills.

You could do worse than check out Wikipedia, from which this line comes: "Its spectacular beauty, along with a dynamic nightlife, have made the island one of Europe’s tourist hot spots."

Many art treasures were found on Santorini, buried under 30 metres of volcanic ash at Akrotiri. 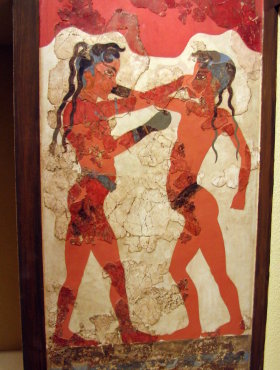 These two boxing boys from a wall painting or fresco show how beautiful are some of these artistic treasures. (The boxing boys fresco was photographed inside the National Archaeological Museum in Athens.)

As you read through the manuscript (typescript), learning about the Greek way of life, marriage customs, archaeology, pirates and invaders from history, you’ll find this exercise tantalizingly exciting. It’s also a good test of your observational skills.

You’ll also be looking out very carefully in the proofs for around 260 errors. In fact, if you find even 250 errors in total, this would amount to a first-class effort.

Proofreading and editing can definitely be fun. You’ll get the chance to read some good books as well, if you go on to find freelance work yourself.

Be warned that competition always makes life that little bit tougher, so you need to work hard to ensure success. Even then, you will need some luck too.

Thanks also to Paul Kirkman for this exellent link giving a brief but also detailed history of Santorini, and some really good photos.